I’m going to build out this lab a little bit more using Netmiko scripting to push configs to SW1 so we get a bit more output to review, and we will also be using JSON within the script as well to make it more readable that a big mashed up blob of output! 🙂

For this I will be using Netmiko to open this file to configure SW1 a bit further:

From old scripts I just clip out the pieces I need to make this new script for SW1: 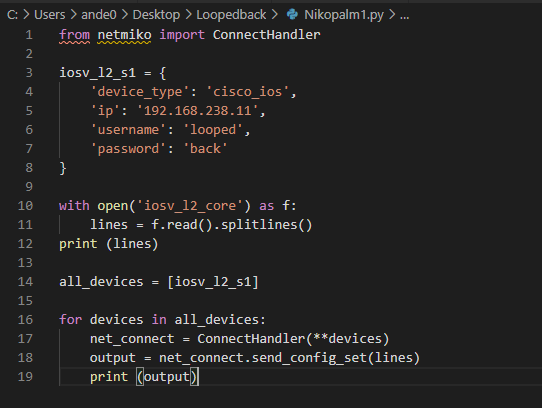 So I throw both of those and execute them on the NetAuto Host to get things rolling:

Which you may see that big chunk of printing output (configs sent to the Switch) and think to yourself “Can’t there be a way to make that readable?” and the answer is Yes!! (at least for Netmiko / NAPALM output!)

We can do that with using JSON as the output encoding format for readability as I will do while working with NAPALM, as JSON actually uses its “key pair” formatting to give description : value output much like Python Dictionaries!

With that I will run the same script from the last lab to review that output:

As demonstrated NAPALM scripts are extremely simple yet powerful among multi-vendor environments, however the output is returned in a Python “Dictionary” format, which is where JSON comes to save the day (script).

This is why “pip3 install -U simplejson” was issued on the NetAuto Host last lab!

Lets take a look at what a couple of lines of JSON code added to the script can do!

Below is the NAPALM script with just one line added and another adjusted in the script:

This imports the JSON Python Library to allow me to adjust the print statement to format the output in JSON format, with an indentation of 4 like we use with Python Code.

Lets compare the output one next to the other here:

What a difference JSON formatting can make with just a couple of line differences!

Now to once again review this table before firing off a few more scripts with new values:

And I add this two lines from the full table (one cmd not shown here) :

I saw the “sort_keys=True” as a parameter that can be used that seems more like it is useful for Multi-Vendor Environments, or perhaps with different types of output it may format it slightly cleaner however with this Cisco Switch is appears the same to me.

When this script is issued on SW1 I get the following output in JSON formatting:

Now that I’ve beaten that dead horse back to death, these little changes in configs can be put into the code, extra lines added to retrieve bulk info, loops added to retrieve from multiple device, all of this output written to files as demonstrated in the “get backup” post I made within the Python3 posts, etc.

All that being said, I am going to get on with my long weekend, Happy 4th of July!

Next I will be adding some routers to run through some other NAPALM configs to this network, but wanted to demo quick how JSON can make that big blob of output returned by NAPALM much more readable for us mere mortals 🙂