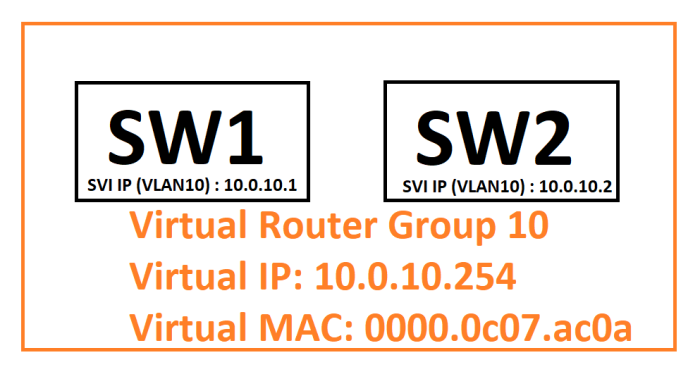 Though there are two physical switches shown with local IP Addresses configured, these represent a single “Virtual Router” as seen by hosts on the LAN, with a single shared IP Address between both devices.

HSRP is a Cisco proprietary protocol defined by RFC 2281, which allows for two or more switches to be configured to be part of an HSRP group, which form a single “Virtual Router” to provide High-Availability / Fault-Tolerant gateway redundancy for the LAN segment.

The HSRP group elects both an “Active Router and “Standby Router” from the group based first on highest Priority value, then by highest assigned IP Address on the network segment HSRP is configured on (SVI, L3 Interface, etc), a higher value being preferred for both the Priority and the configured IP Address while being elected.

The Active Router handles all the workload as the default gateway of the LAN segment, the job of the Standby Router is to take over if the Active Router were to fail, all other Router Group members go into a “Listen” state where they do not send any Hellos but rather listen for them from the Active and Standby routers.

The “Active” and “Standby” Routers send Hellos every 3 seconds by default to Multicast “All Routers” IP Address of 224.0.0.2 via UDP Port 1985, which contains HSRP status information for the local switch, which is sent in a unique way so Router Group members can identify each other with the following “Source” Addressing method:

For any devices or hosts downstream from the HSRP enabled switches, they will only see the Virtual Router addressing information for both Layer 2 and layer 3 communication.

HSRP requires a Layer 3 interface on the switch that contains an IP Address for the network segment it will be acting as the gateway for, this can be a L3 Routed Port / SVI Interface / L3 EtherChannel, the assigned IP Address of the Layer 3 interface cannot be used for the Virtual Router IP configuration.

The Virtual Router IP CANNOT be assigned the same IP Address configured on the L3 Interface, the CLI will reject the command, and will not enable HSRP on the interface.

The Virtual MAC Address is made up of a well known HSRP MAC Address, followed with a two character Hex field representing the group number in the following format:
0000.0C07.ACxx
Highlighted in blue is the well known address for HSRP, and highlighted in red is the Hex value of the HSRP group #, the group # being a value between 0 – 255.

For information on Hex to Decimal conversion, my post on that can be found here.

MHSRP will be covered in a separate post, but wanted to bring that up here, as one good detail to know for HSRP is that a maximum of 64 instances of HSRP can be configured on a single switch.

This seems like prime exam question territory as the group number range is 0-255, however the maximum number configurable on a switch is 64, and is different in Version 2 which will be covered briefly just below.

One last note speaking of Version 2, HSRP Version 1 and Version 2 are not inter-operable, you must either run Version 1 or Version 2 across all members of the HSRP group.

Here is a quick list of default values for HSRP, bullet point style:

I won’t go into detail for Version 2, but some basic differences to know for exam day:

I may add more to this, but I don’t think it is worth committing to memory for exam day beyond this basic information, there is plenty more to focus on with Version 1!

To start the configuration, a Layer 3 interface with an IP Address is needed:

This SVI interface is now ready for HSRP configuration, which I’ll start with the absolute most basic configuration needed for HSRP to be enabled on the interface:

The command “standby ip” issued at interface level is all that is needed to configure or enable HSRP on a switch switch, once enabled it will go into a “Learn” state where it is trying to learn the Virtual Router IP information from fellow HSRP group members on the LAN, with a catch!

Switches can only Learn a Virtual IP from a member of the same Router Group, so another switch would need to also be in the default Router Group 0, and be reachable via VLAN 10 (no pruning on the path) to receive its Virtual IP.

After configuring this most basic group configuration, I review the “show standby” output which is the main verification command for HSRP:

Everything is at the default values stated in the Fundamentals section, and also the state is in “Learn” until it receives a Hello with Virtual Router / IP information, from a member of default Router Group 0 on VLAN 10.

To enable HSRP on a switch, all that is needed is “standby ip” on a Layer 3 interface.

I’ve removed that basic configuration, and will walk through a more complete configuration on SW1, as SW2 has already been configured with the same HSRP settings as will be demonstrated on SW1 to reduce output clutter.

Going step by step with IOS help along the way on SVI VLAN 10:

Note that this time, the group # is defined first, then the IP Address.

When configuring by IP address, you cannot put in a group # after:

This will default the group # again to 0, so for a group # that is not 0, you will want to specify that first and then define the IP Address to enable HSRP on the interface.

Now to review the output of the configuration using “show standby” again:

I could about highlight the whole output for valuable information, however it can be seen the Virtual IP Address is now configured along with a unique group #, and the Virtual MAC now has “0a” as the group # in Hex format.

It shows the Active Router is SW2 with its local IP 10.0.10.2 and Priority 100, and the standby router is the local router, with additional info such as # of state changes / time since last state change / Timer information / Group “name” / Priority / Etc.

Some possible random gotchas with the basic configuration

If a different Virtual IP Address is entered on a switch with a group # that is already live on the network, there will be a continual console output message until it is fixed:

It WILL still join group 10 with a different Virtual IP for itself, which means if fail over occurs, the hosts with a default gateway of 10.0.10.254 will no longer be able to reach the gateway because of this mismatching Virtual IP.

A trunk interface that is allowing the SVI VLAN traffic is required, which is verified by “sh int trunk” to check for manual / STP / VTP Pruning, and adjust any Pruning being done to allow the traffic if needed.

Watch for the default “standby ip” configuration on what should be a Router Group member for a unique group #.

As long as there are Trunk Ports along the path between the HSRP enabled switches, those switches along the path have the VLAN configured on them, and that VLAN is allowed over the Trunk links then there can be 20 hops between each HSRP member!

That is it for this one!

Onto some finer details of HSRP!