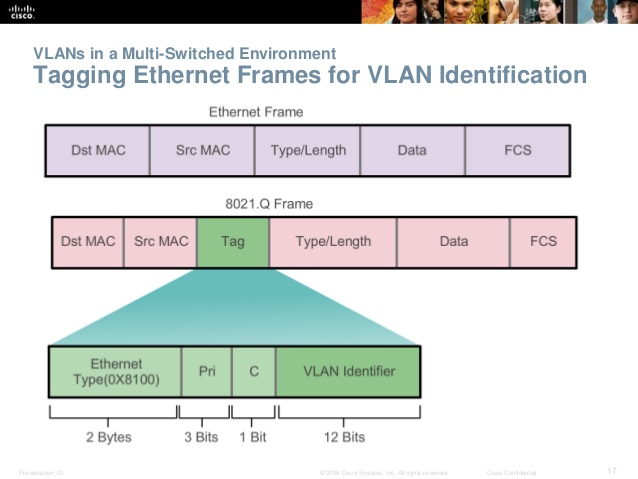 “Frame Tagging” is adding a VLAN ID tag to an Ethernet Frame when traversing a Trunk, depending on what encapsulation you are using it has different rules, and one important note is that when a Frame traverses an Access port it does not get tagged – Only on Trunk ports. Now if the Ethernet frame

When looking at the encapsulation on the last post we had 3 choices from which to choose:

So you have “dot1q”, “isl”, or can set the switch to negotiate and work use either depending on the other switches encapsulation type.

There are 2 things that are common between ISL and Dot1q:

That is where the similarities stop, and the differences come in:

So there is about nothing to like about ISL, I cannot think of any reason to be using it, and in some study materials it is claimed to basically being phased out – But we must know the differences from its nemesis dot1q.

However try to memorize why it’s so horrible, and the overhead it brings to the table.

**I am researching but not finding much immediately on the difference between ISL tagging and internal tagging, or ISL not “embedding” its tag on the frame. If I find some clarification on this I will expand upon that**

So ISL could be known as “Double tagging” and dot1q as “Single tagging” and both have a 4-byte header, but they are in different places. ISL’s is in it trailer while dot1q has it as the VLAN ID in the Header (No trailer for dot1q).

Again, if it is traversing an Access Port the switch knows that port is in 1 VLAN only so it is NOT tagged when traversing it, only tagged over Trunk ports.

I will bookmark this VLAN topic here, as next is a hefty discussion about Native VLAN’s (why we need them), and get the lab involved with changing them around!