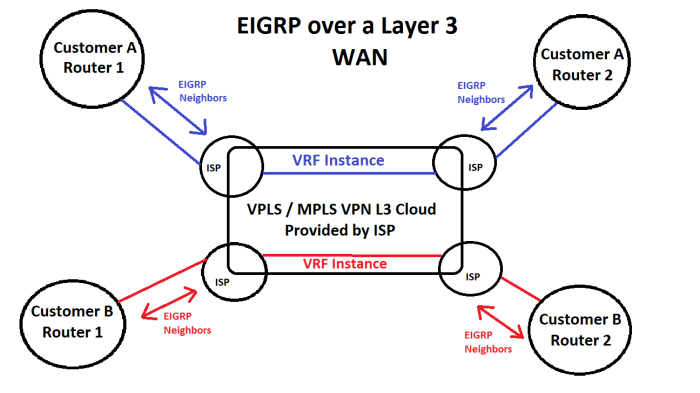 Have a few more deep dive sort of Material / Review for EIGRP, and one of them I wanted to be clear on for the exam and out in the wild, is how EIGRP forms relationships over the WAN and why it’s important to know what type of WAN is connecting the neighbors.

EIGRP over a Layer 3 WAN (as pictured above)

When configured EIGRP over the NBMA, I never had to think about where my neighbors truly are, because it’s a Layer 2 type Media that allowed me to ping between R1/R2/R3 without routers or Protocols cause they all showed as Directly Connected routes.

Now this is going to way beyond the scope of CCNP, but to explain the difference between MPLS and VPLS:

That is as far as I will go with that explanation, but for someone saying “MPLS” isn’t Layer 3, we are talking about VPLS (MPLS VPN) services provided by ISP’s.

Now in the VRF-Lite post I discussed that the scope of VRF in it’s full version is used by ISP’s, this is what I meant, they use different VRF instances to route customer traffic so even if they are using overlapping networks they don’t share any sort of routing information between the different instances – This allows MPLS and VPLS to work.

However in the context of EIGRP over this type of WAN, I wanted to illustrate how doing EIGRP over a WAN is possible, as I was a bit mind boggled when I saw this on the job.

It is possible by forming neighbor relationships with the ISP’s router on the Service Providers Edge routers, and the routes are sent through the WAN separated by VRF instances to the other side, where another Neighbor relationship is formed between the Customer router and the ISP Edge.

So to be noted, the two customer routers do NOT form the EIGRP relationship, the two routers form relationships to the ISP routers, and the ISP transports the routes.

This for EIGRP is the equivalent of building Neighbor Relationships over a LAN, as they do form neighbor relationships with each other, rather than with ISP Edge routers.

Metro Ethernet is considered an Ethernet hand-off to a Multi-Access LAN, and does not peer your network edge to the ISP’s network edge.

This is about the equivalent to Metro Ethernet, it is a Layer 2 WAN service, where EIGRP neighbors can be discovered dynamically without “neighbor x.x.x.x” statements (with most FR WAN setups), as has been the case with my Frame Switch in the middle of my lab.

Frame-Relay also gives you the option of a Point-to-Point connection or Point-to-Multipoint connection with sub-interfaces, but there is also some drawbacks like Split-Horizon (nothing some “no ip split” can’t handle on the Serial interface). One note is that

Now one major difference between the two is that Ethernet is a Layer 2 “Shared Bus” type Media, so if you put out a single large update, by virtue of the media type it should undoubtedly be received and acknowledged by all other routers on the medium.

However, Frame-Relay does not operate this way, its actually not possible to.

Although for my lab it works pretty good, however there are such good alternatives in todays networks you probably won’t see this much except for in a lab environment.

With that, I have a few topics left to completely cover review EIGRP cause I didn’t really dig into that as much as I should have the first round, this protocol will probably get the most attention aside from possibly BGP review out of the lot of them.

With that, the next topic will NOT be review, I need a breather from recovering topics!