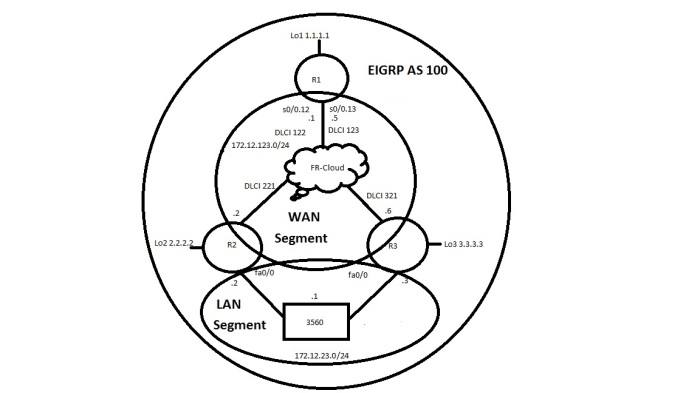 Above is a rough drawing in paint of my current topology I have worked through the Advanced EIGRP section with, Frame-Relay NBMA Hub-and-Spoke WAN, and Fast Ethernet LAN segment to make things… more interesting to troubleshoot.

It does not of course show all the configurations changes, summary routes, and things that have been broken then fixed then broken again on it 🙂

I am just starting this now at the tail end of my Advanced EIGRP section of Chris Bryants video series, so unfortunately I can’t re-live my daily struggles on the live equipment I have been dealing with, but it has been an uphill battle.

I’ve put together a bare bones config for my routers and switch for the LAN segment of my network in saved notepad docs for a quick startup which was fairly easy, then when putting in the EIGRP configs on top of that, I didn’t realize the battle I was about to wage with understanding Hub-And-Spoke NBMA networks and how they do not like interfaces forming LAN adjacencies while also trying to to have the Serial interfaces of the spokes form an Adjaceny back to the Hub configured with S0/0 as two sub interfaces so Split Horizon isn’t blocking route advertisement.

I will save the trials and tribulations, debugs and show output here, but somewhere on a message board there is miles of output from this issue – It was ugly.

When I had first configured my topology which is a little hazy prior to all the troubleshooting, I did not sub-interface the Hub, yet routes were still propagating which I believe was happening over the LAN as Split Horizon would have been preventing it on my “WAN.” I believe that is where a lot of the confusion came in, is once I configured the hub with the sub-interfaces, it immediately started causing problems on the spokes and dropping the adjacency from R3 up to R1.

I did have a 3560 as my switch LAN when all these problems started, and was unsure if some default behavior was causing the issues, so I put in the 2950 Layer 2 switch which sort of introduced a new set of issues which are now resolved. So my next step before launching into OSPF Basics and Advanced concepts is to put the 3560 back in and see what problems that possibly reintroduces, and put away some of the EIGRP material in my ROUTE Simplified book to get a better understanding of what mechanisms were causing the adjacencies to drop in different parts of the network.

Now that I am off work and figured that out I am about ready to fall over brain dead, so I shall update on the struggle (if any) with putting the 3560 back into the mix, and my thoughts of any important details I may want to have on here to relive some day.